Recently I acquired a copy of Fulgur’s Touch Me Not, a facsimile, transcription and translation of the Wellcome Library’s notorious Compendium rarissimum totius Artis Magicae (MS1766). This manuscript has circulated quite widely over social media during the last year or so, mostly owing to a fascination with the diversity of demonic genitalia on display therein!

Such lurid descriptions as those above undoubtedly make good copy, but what I found most interesting was the way the text interpolated material – chiefly on narcotic salves and fumigations – from the Aufschlüsse zur Magie (1788/1792) of Karl von Eckartshausen. I was only dimly aware of the work of Eckartshausen, but Touch Me Not compelled me to find out more… 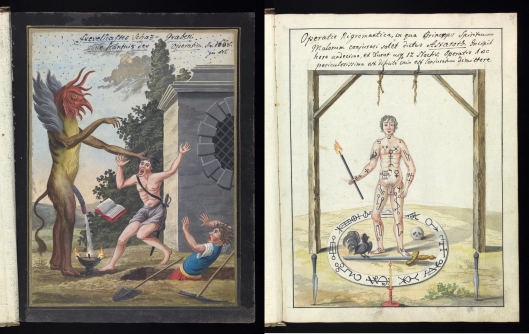 Images from MS1766 – a necromantic operation gone awry (and a demon described by Tilton & Cox as ‘dolichophallic’!); sigillic body art, as part of an operation to conjure Astaroth.

Eckartshausen is best known as a Christian Theosopher, whose The Cloud Upon the Sanctuary was highly regarded by proponents of the 19th-century occult revival. However, the Aufschlüsse is a fascinating patchwork of biographical, magical and esoteric material, which reflects the mood of the age. Eckartshausen makes numerous appeals to both electricity and the imagination, which could be seen as two symbols that typify the blossoming of German Romanticism, with its particular fascination with uniting the natural and spiritual sciences (- and in this respect, it is unsurprising that both Goethe and Novalis knew his work). It is also this context that casts MS1766 in a very different light: as an artefact of Romanticism’s dark side – the Gothic. MS1766 is a phantasmagoria, whose images we might imagine projected as part of a magic lantern show – an art Eckartshausen himself experimented with. One can imagine the manuscript, with its provocative and dramatic imagery, being composed as an object of curiosity and entertainment for a circle of Romantic or Gothic aesthetes.

Phantasmagoria slides from the collection of Helsinki University Museum. 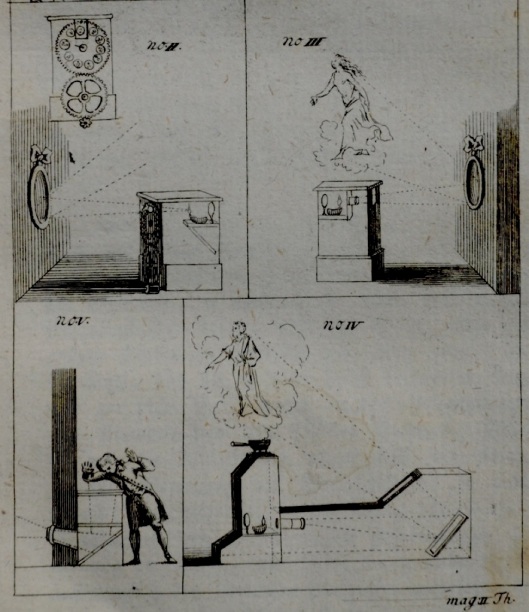 Eckartshausen’s magic lantern to project a ghost onto a pedestal (from Balzer 2013).

I was surprised to discover that Eckartshausen’s Aufschlüsse features several references to magical music, which – as one of the main preoccupations of this weblog – I will use the rest of this post to ruminate on.

Eckartshausen’s digressions on music begin toward the end of the first book, when he begins to discuss the power of the senses, particularly drawing attention to a blissful state that occurs ‘when the nerves of sight, smell, hearing, taste and feeling are simultaneously brought into motion in the most pleasant way’ (I.38). In this respect, he draws attention to the powers of the ‘celestial bed’ built by the 18th century sexologist James Graham, which Graham described in his own words as:

My Celestial or Magnetico-electrico bed, which is the first and only ever in the world: it is placed in a spacious room to the right of my orchestra which produces the Celestial fire and vivifying influence: this brilliant Celestial Bed is supported by six massive brass pillars with Saxon blue and purple satin, perfumed with Arabian spices […] Any gentleman and lady desirous of progeny, and wishing to spend an evening in the Celestial apartment, after coition may, by a complement of a £50 bank note, be permitted to partake of the heavenly joys it affords by causing immediate conception, accompanied by the soft music. Superior ecstasy which the parties enjoy in the Celestial Bed is really astonishing and never before thought of in this world: the barren must certainly become fruitful when they are powerfully agitated in the delights of love.

Eckartshausen is more interested in the psychosomatic effects of the environment – and in fact doesn’t mention that Graham’s bed was primarily an electrical fertility-machine. He does, however, discuss his own attempt to make some sort of space for supreme, blissful relaxation, which he describes thus:

I came upon the idea of concentrating sounds of music to make them more noticeable and effective upon the nerves of a human being. In order to achieve this, I had a machine built which resembled a sounding-board and was large enough for a human being to comfortably lie on horizontally. In the next room the music was played under a hat-shaped funnel from which two pipes protruded which lead to a large-sounding board whereupon the human being was resting. The sounds of the music concentrated through the hat-shaped funnel and then travelled through the pipes to the large sounding-board.

The feelings which the person experienced who was lying on the large sounding-board were indescribable. The more harmonious the music was, the gentler, the more pleasant the feeling, which spread throughout the body. […] The feeling generally expressed itself by a pleasant tickle in the abdominal area and diaphragm. (I.38)

These descriptions bring to mind the acoustic funnels illustrated in the work of Athanasius Kircher, the sound-beds used in holistic music therapy, and the Kaffe Matthews’ 12-channel electroacoustic sonic beds.

The correspondence between metaphysical and sensual worlds is a preoccupation of occult philosophy, most influentially set out in works like the second book of Agrippa’s Occult Philosophy, Grosscheidel’s Magical Calendar, and the correspondence between the various Cabalistic sephiroth and stars, colours and moral virtues. A resurgence of interest in what had become ‘esoteric’ in the face of the Enlightenment, alongside a variety of technical and scientific innovations, may have been one of the drivers for the vogue for synaesthetic experiences that seem to have developed around this period, particularly the idea of a ‘visual music’ (- on this topic, Deirdre Loughridge’s Haydn’s Sunrise, Beethoven’s Shadow looks excellent). The ‘colour organ’ of late 19th-century composer, Theosopher and synaesthete Alexander Scriabin is perhaps the most well known attempt at this, although a progenitor can be found in the Ocular Harpsichord of French mathematician Louis Bertrand Castell (itself derived from Isaac Newton’s colour-tone theories), which Eckartshausen speaks highly of. 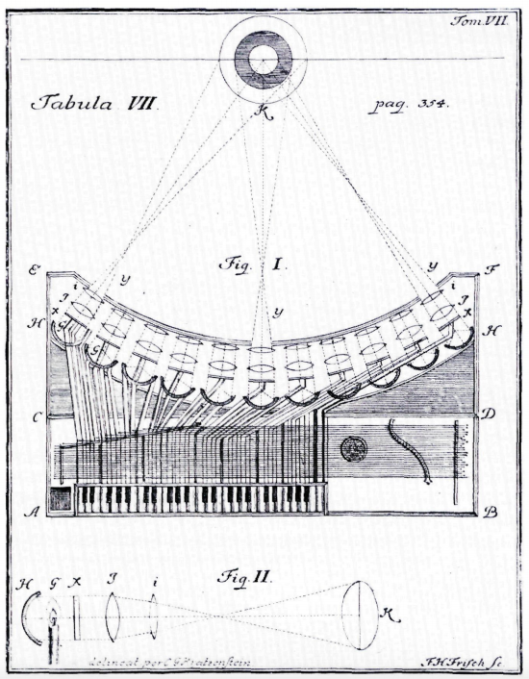 Naturally the correspondence between light and musical scale has had its critics: pitch is logarithmic, the colour spectrum linear; pitches have a form of similarity known as octave equivalence, whereas visible light is but a small part of the continuum of the electromagnetic spectrum – although the search for colour-tone equivalence still keeps a number of esoteric and New Age musicians and theorists very busy. Eckartshausen claims to have built his own ocular harpsichord, which leads him onto a deeper discussion of synaesthetic art as he analyses the connections between poetry, sound and vision in the chapter that follows:

Extract of Eckartshausen’s ‘visionary music’ from Magic (I.39).

He also suggests that the performance would be accompanied by a variety of scents for each moment – with the intriguing suggestion that a mixture of all scents would smell like ambergris, which is – therefore – the aromatic analogue of white light! It is also difficult not to read Eckartshausen’s list of colours without thinking ahead to the musical ‘thoughtforms‘ of Besant and Leadbeater, or the visual ‘compositions’ of Kandinsky and his discussion of colour and instrumental timbre in Concerning the Spiritual in Art (p.39 here).

The music of Wagner as visualised by C.W. Leadbeater (1901).

Eckartshausen’s final chapter devoted to music (I.48) is devoted to a humoural theory of music therapy. Although the term ‘nerves’ has replaced the ‘spirit’ in Eckartshausen’s argot, they seem to possess the same function as in earlier forms of occult philosophy – as mediators between bodily sense and soul. Eckartshausen’s examples (appeasing anger, or changing despair to courage) evoke the foundational myth of the ‘Phrygian piper’, who, by changing his musical mode, diffuses a violent situation (see Iamblichus’ Mysteries, chapter IX). The basic idea of modal music as affecting the humours is not much changed from the ideas of Marsillio Ficino in the late 15th century – although the suggested instrumentarium by which this music may be realised, along with the descriptions of tempi are certainly of the 18th.

The translations in this post were largely derived from the 1989 English edition of Aufschlüsse zur Magie titled Magic: The Principles of Higher Knowledge (trans. Gerhard Hanswille & Deborah Brumlich, Merkur Publications) – some amendments and corrections were made as I saw fit. Eckartshausen’s book is crying out for a new translation and commentary, since it illuminates a uniquely Romantic interpretation of  magic foreshadowing the great 19th century revival of occultism which would blossom half-a-century later.