Alan Dunn recently asked me to contribute some music to The Lighthouse Invites the Storm, a festival of celebration for Malcolm Lowry, running around Liverpool from the 17th to 29th of July. Below is the fruit of my labour, along with a description of the rationale for the piece, which is also available for free download from my bandcamp (which includes a PDF of the liner notes). 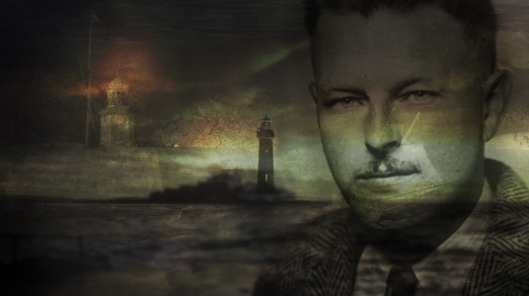 Alan had chanced to hear a track from Hesperian Garden while simultaneously auditioning Balam Ronan’s field recordings from the Mexican Día de los Muertos celebrations. He asked if I’d be interested in contributing something hallucinogenic and mescal-fuelled, so here is my response: an electroacoustic re-imagining of Balam’s documents; a trembling, drunken dream with flashes of heaven and hell – the celestial and chthonic – punctuated by the sound of carnivalesque street bands drifting in through an open window…

Not desiring to literally interpret Lowry’s multi-faceted, ‘churrigueresque’ work, I focused on a number of images that I found potent, both from Lowry’s text, and from the biographical detail and academic interpretation surrounding it.

The first image was that of a bell – one of Lowry’s recurring allusions to Dante’s Inferno:

A bell spoke out, then ceased abruptly: dolente…dolore!

This sentence occurs twice in Under the Volcano – in the first and in the final chapters, bookending the work. It is a contraction of the inscription at the gate of Hell:

Inspired by Lowry’s contraction of the inscription, and connection of the same with the sound of a bell, the piece opens with a synth drone (generated by frequencies with numerologically significant relations to dates in Lowry’s life), behind which fragments of a church bell begin to coalesce. The fragments are taken from the onset of the bell sound (‘dolente’) and its reverberant decay (‘dolente’).

These bells then enter a section based on one of Balam’s recordings, which appears to capture a liturgical event. An American woman in the crowd can be heard talking – the section ends when she says the words “You’re so drunk!”, which seemed appropriate given the relationship that Lowry, and his fictional Consul, Geoffrey Firmin, share with alcohol. 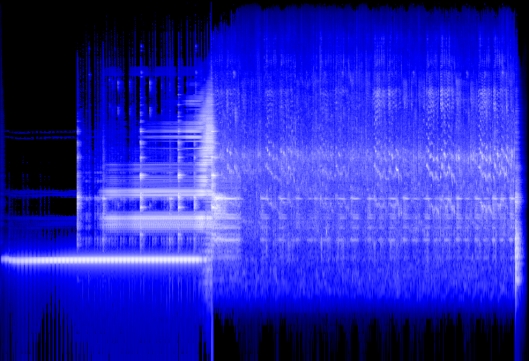 These two sections comprise the ‘A’ section of the piece, and the liturgy is granularly processed to create the opening of the next section: a brief moment of the voice becomes redolent of earth falling upon a coffin, opening up the chthonic, or underworldly ‘B’ section. The events of the penultimate chapter of the book particularly haunted me, in which the Consul’s ex-wife, Yvonne, is trampled by a runaway horse in a dark wood. Her dying vision interleaves fantasies of an ideal life with celestial imagery. She sees her idealised home in Canada, shared with Geoffrey, burning:

[T]he tide washed under the ruined house, the pleasure boats that had ferried song upstream sailed home silently over the dark waters of Eridanus. Their house was dying, only an agony went there now. And leaving the burning dream Yvonne felt herself suddenly gathered upwards and borne towards the stars, through eddies of stars scattering aloft with ever wider circlings like rings on water, among which now appeared, like a flock of diamond birds flying softly and steadily towards Orion, the Pleiades…

The celestial, diamond birds are audible here – plucked from Balam’s recordings and manipulated into their spectral counterparts. Eventually these textures give way to an expansive drone – an elongated version of one of the chords from the street band in the subsequent section. The austere organ part that joins this was composed by randomly assigning ten tones (drawn from a pool of three chromatic octaves) to the cabalistic diagram known as the Tree of Life. Cabala haunts Lowry’s writing, possibly as a consequence of his friendship with one Charles Stansfeld Jones, alias Frater Achad, a disciple of Aleister Crowley. Lowry’s fictional Consul is himself, something of a magus-of-sorts:

[O]n high shelves around the walls: Dogme et Ritual de la Haute Magie, Serpent and Siva Worship in Central America, there were two long shelves of this, together with the rusty leather bindings and frayed edges of the numerous cabbalistic and alchemical books, though some of them looked fairly new, like the Goetia of the Lemegaton of Solomon the King, probably they were treasures, but the rest were a heterogeneous collection: Gogol, the Mahabharata, Blake, Tolstoy, Pontoppidan, the Upanishads, a Mermaid Marston, Bishop Berkeley, Duns Scotus, Spinoza, Vice Versa, Shakespeare, a complete Taskerson, All Quiet on the Western Front, the Clicking of Cuthbert, the Rig Veda–God knows, Peter Rabbit; “Everything is to be found in Peter Rabbit,” the Consul liked to say…

In this section, the tones that the organ can play are dictated by their relationship on the Tree of Life. If, for example, a C# in the 5th octave is played, it can be followed either by D5, C5, or C#4: 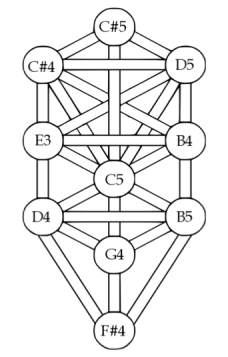 A tonal Tree of Life

The ‘B’ section terminates with a sound drawn from a street band, the recording of whom forms the basis of the next section – a return, from the chthonic to the terrestrial. Snatches of a guitar and accordion group gradually assemble, as though the listener is drifting in and out of lucidity. This section terminates as the singer utters the word ‘muerto’, casting us back into an abyss – for a moment: 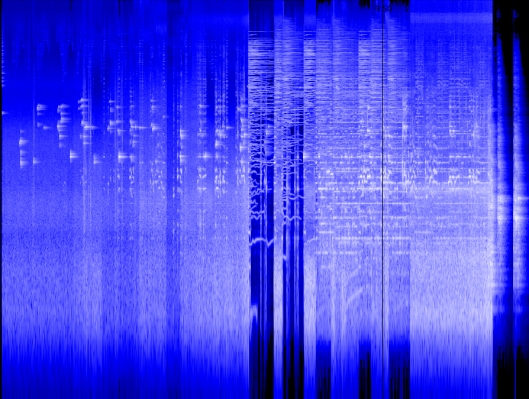 The penultimate section (‘D’), opens with a dense, textural drone, created by further manipulating the word ‘muerto’. In contrast to the nightmarish manipulations that preceded it, this is a calm, expansive, but overwhelming celestial atmosphere, referencing not only by Yvonne’s final journey to the Pleiades, but the portentous role of the heavens throughout Lowry’s novel, for example in Lowry’s description of the back rooms of the inn known as the Farolito:

These rooms struck him as spots where diabolical plots must be hatched, atrocious murders planned; here, as when Saturn was in Capricorn, life reached bottom.

The high pitched sounds that float above the drone are sonifications of an image of the Pleaides, and this section closes with an allusion to the similarity of the sonogram with an image of the sea at night: a shift into what Lowry scholar Nigel Foxcroft calls Lowry’s other perspective: the aquatic (complemented by underworld, terrestrial and celestial – each of which has been assumed in the preceding sections).

The final section of the piece aims for the uncomfortable, harrowing and tempestuous: the same sonic resources as the introduction are revisited (FM synthesis and bell sounds), although in a harsher manner: an evocation, perhaps, of the spirit of the stormy night that brings Lowry’s novel to its final climax, and ends the lives of both Yvonne and Geoffrey?

1 thought on “Dolente … Dolore: The Inferno of Malcolm Lowry”