This blog has been a bit quiet of late, although that’s not to say that things haven’t been bubbling away behind the scenes: expect quite a lot of news in June in the form of a new Hawthonn album, our first interview, a new academic paper, and possibly even an art exhibition… or two!

Until then, here’s a little summary of other things that have been going on over the last few months!

First, I’m very honoured that Ben Chasny has created a page dedicated to my Hexadic compositions on his Six Organs of Admittance website. Working with the Hexadic system over the last year or so has been a great experience – whereas much of my early music was (poly)modal, Angelystor and my studies into Josef Hauer have seen me adopting a more atonal language. His book on the Hexadic System fit perfectly into this arc of development. As I explain on the page, I often use transposed versions of each Hexadic field to create two voices. Sometimes these are independent, sometimes they function in terms of melody and harmony.

A Hexadic field and centre tones mapped to keyboard.

The pieces on Sorath were all very formally written, exploring various approaches to the system in a fairly methodical way. More recently I’ve been exploring approaches to improvising within a series of Hexadic progressions. To this end, I’ve been writing a little Max for Live patch to help quickly explore Hexadic material and to facilitate swift improvisations on the same. The results have been quite engaging, here’s an example:

However, one advantage of the compositions in Sorath being very formally written, is that the passage into notation is far smoother. I’ve recently been working on realising the three-movement title track into a neat score. Currently wrestling with intricacies of enharmonic spellings and phrasing/beaming, which take me back to my days as a freelance copy editor – and I’ve not even got onto registrations yet… but I’m sure it will all be worth it in the end!

I should also mention that I had the pleasure of being interviewed by Ajay Ravi for Dublab radio, who has put together an hour-long Hexadic System Special! My interview was over the phone, so is somewhat lacking in audio fidelity, but a pleasure to hear Ben talk about the system! (The interview with Erik Davis is also very good! And while you’re there, listen to Davis’ interview with Egil Asprem, whose academic work I greatly admire and think is one of the most exciting developments in Western Esoteric studies of late. Thanks also to Egil for linking here on his blog! In fact, speaking of Egil’s work, there is definite overlap with my own experiential work on imagination and creativity – more on that next month!)

Ben has also compiled a list of ten great album for Dusted. I’m pleased to see that Angelystor is on there – which is nice because the same work was also recently featured as part of the online exhibit for Fresh Yorkshire Aires: a project about graphic and ‘photographic’ scores in Yorkshire. You can listen to Angelysor and follow the graphic score over here. Many thanks to LCM lecturer Jacob Thompson-Bell for his interest in the piece and for organising this project, which will also be an exhibition at Munro House 14-17 June and live premiere of newly commissioned works on the 16th.

Finally, I was also honoured to be asked by Kim Cascone to provide a foreword to the programme of his recent Drone Cinema Film Festival, which took place on the 9th of April in two locations – The Grand Illusion Cinema, Seattle and De Vrijplaats, Leiden. Layla and I also did the artwork and photography for Kim’s recent release on Emitter Micro, which looks beautiful in its silkscreened card sleeve. The CD consists of two complex drone environments with psychotropic bass patterns that seem to bleed into the acoustics of whichever space you are listening in. A good counterpart to a subtle listening session! 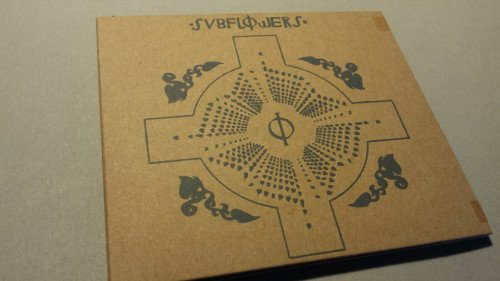