I was intrigued when I discovered that Ben Chasny, of Six Organs of Admittance, had used a system of indeterminate composition to write material for his new album, Hexadic, working with the arising materials in the idiom of sprawling, improvisatory psychedelic rock, which evokes parallels with Mainliner, his earlier Comets on Fire freakouts, the grimy ‘tape muck’ of Ashtray Navigations and the distorted, dissonant metal of groups like SunnO))) and Khanate. There are also occasional forays into calmer territories on tracks like the beautiful Hesitant Grand Light and Guild, and the moody, ever-descending Future Verbs.

Although Ben has hitherto spanned a wide-range of styles and genres in his music-making, I still thought it was a brave decision to embrace such approaches so completely: the inevitability is alienating one’s more conservative ‘fans’, while trying to develop as an artist and pursue the aspects of music making that are most vital and interesting to oneself. I still think that the experiments in atonality initiated by composers such as Schoenberg and Hauer in the early 20th century have a lot more mileage in them, and this brilliant article by Philip Clarke really highlights the issues regarding the tensions between established and ‘new tonalities’:

Here’s the challenge. We need to be open to hearing this new tonality. It isn’t going to sound like the old tonality, and that’s fine – too much whining about new music is based on little more than ‘it doesn’t resemble the music I already like’. As mainstream pop, and what continues to pass for ‘New Music’, uses less tonality more cynically, there’s space for a new breed of composer interested in using more tonality, more pointedly to fill that gaping vacuum. Composers today are repeatedly pounced on because – allegedly – they lack relevance to the wider world. And thus a new, noble cause is born – creating an expressively pungent, provocative, culturally subversive tonality that rubs lamestream noses in their own mediocrity. Does that aspiration strike a chord?

With these thoughts in mind, I was excited to discover that Drag City were also going to publish a Hexadic book and deck of cards. The result, The Hexadic System, is a beautifully produced summary of Ben’s developing system, and, unlike many books I’ve recently invested in, it’s also extremely affordable ($25 for the book and deck of cards)! The book is a beautifully designed paperback, with great use of rubrics to enhance the text, possibly in homage to the conventions of more arcane publications that may have influenced it, for example, the publications of Ouroboros Press and Trithemius’ Steganographia: 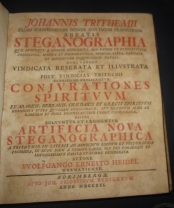 Another archaic convention, which is used to initiate and conclude the text, is that of the dialogue, in this case between an owl and a hoopoe, the latter a fabulously crested, magical and mysterious bird often associated with arch-magus King Solomon. The material between these dialogues, however, is of a more practical nature, and outlines the way in which Ben has developed a series of methods for indeterminate composition through the use of a deck of playing cards, chosen for both their ubiquity and romance.

Being written by a guitarist, The Hexadic System is primarily geared toward guitar-based music making: the illustrations are generally in tablature, and the various compositional ‘games’ that are suggested are for two guitar players. Obviously the ‘sixness’ of the guitar seems to have inspired the ‘sixness’ that runs through the hexadic system, but that is not to say that there are not rich possibilities within the system for composers and non-guitarists too. What follows are some thoughts and non-guitar-based experiments based on month of experimenting with the ideas put forward in The Hexadic System. A few points may be oblique, in order to encourage you to support the artist by buying a copy of the book!

One of the first things that caught my eye was the chapter discussing a game called Triadic Movements, in which a deck of all 36 cards (representing all tones and semitones over 3 octaves), or fewer (representing notes within a specific tonality) are dealt in groups of three between two players, who interpret them, and then replace one of their cards with another from the deck, to create a slowly evolving tonal scheme. This idea of having relatively static groups of six notes, in which, after a short time, one note changes, reminded me of the way that Josef Matthias Hauer had used a tonal continuum to underpin his zwolftonspiel pieces.  The difference being that Hauer’s tonal continuum only ever mutated in steps and half-steps:

The tonal continuum in the Triadic Movements game, however, can mutate in extremely wide steps, spanning two or more octaves! But the key idea shared with that of Hauer’s approach is one of unity: by the time the game has been played, all the possible tones will have been represented, although here they are octave-specific tones, rather than non-octave specific ‘pitch classes’.

I wrote two studies based on this concept. In the first, the ‘game’ is played compositionally, exploring the interplay of tones arising from a deck of 21 cards, based firmly in the tonal system:

Beyond Triadic Movements, one of the most striking components of the system is the hexadic figure, a six-by-six grouping of cards into twelve ‘hexadic fields’ which belong to the ‘arms’ (A,B,C,D,E,F) and ‘poles’ (I,II,III,IV,V,VI) of the figure:

The figure also embraces other concepts, such as the centre tone (a non-octave specific pitch-class) and the root and interval tones, which suggest hierarchies within each of the hexadic fields. The interval tones are also used for working out how one progresses around the hexadic figure, although I won’t impart the secret here! To get a feel for how the basic progressions and hexafields in the above figure sound, listen to the following example. I didn’t use Ben’s rule for when to end a progression, but went in favour of exploring six progressions regardless of interval-tone card colour. The centre tone is used as a pedal tone, and precedes each hexadic field in the progression. Following the centre tone, the root and interval tones are played, followed by a sequence drawn from the other tones in the field. Once this sequence has been completed, the recurrence of the centre tone introduces the next hexadic field:

Obviously the hexadic figure on its own presents an embarrassment of pitches. The creation of progressions diminishes or structures the field of possibility somewhat, yet still providing a composer/player with material alien enough to be challenging: to force the imagination and ear into new ways of listening, playing and composing. A more involved example of working across progressions on a hexadic figure can be heard here:

To invoke another comparison with the ideas of Hauer: the progressions suggest groupings of tonal material, after which the composer is challenged to engage in a compositional ‘game’ to find the most appropriate expressions of that material. Hauer often developed rules, which could be comprehensively applied to his tonal continua, creating theoretically unified (and often rather aesthetically uniform) compositions. Whether one sticks slavishly to rules, or uses the hexadic fields and progressions in a looser way – a method by which to break with convention – is obviously up the the individual. The value of engaging with systems like this is at least twofold: firstly, working in an atonal paradigm is an excellent mode of ear-training, opening up the appreciation of relationships in pitch and time not commonly found in other forms of music; secondly, whether one systematically employs it or not, it is a movement beyond the denuded tonal landscape of mainstream music: it is the type of pursuit that is vital for any musician who feels the need to periodically explore other tonal possibilities and extend their own musical language. To touch on this and the question of the ‘relevance’ of such approaches in the 21st century, I will close with a short extract from the opening dialogue:

OWL: Is this really necessary in today’s age? Do we need any more systems?

HOOPOE: The system only creates a framework. After holding the self back, it will rush in to fill the spaces.

There is much more to say about The Hexadic System, particularly regarding the possibilities for the use of magic squares and the connections with speculative music, divination and Lullian art. However, that will have to wait for another day – meanwhile, for those with an interest in going further, Ben is also maintaining pages on his website with additional Hexadic resources and explorations.

4 thoughts on “Exploring the Hexadic System”