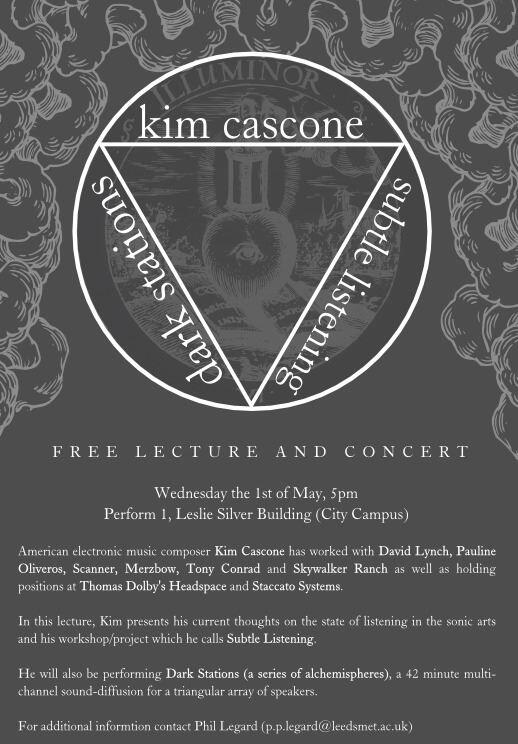 Poster for the 2013 Dark Stations concert.

Last year I invited Kim Cascone to the university for one of his Dark Stations concerts. Dark Stations is a 42-minute piece for a meditating audience based on a 3.1 diffusion system: the listeners sit in darkness within a triangular speaker array, a sub-bass speaker in the centre. The performance last year was one of the most interesting audio experiences I’d had for some time, culminating in a profound experience of auditory pareidolia: frequencies and room acoustics meshed to form phantom speech that I found it impossible to disassociate from the voice of my (then unborn) son, Lovernios.

I was pleased to be able to invite Kim back this year for a reprise of Dark Stations, preceded by a two-day Subtle Listening workshop. The workshop, subtitled “Inner Ear Training for Sound Artists” takes a highly reflective approach to sound, sound design and composition, designed to take participants beyond the technical ‘how to’s that education in music technology and production often dwells on, and toward a more creative, intuitive relationship with sound and what might be called ‘imaginal acoustics’.

Poster for the 2014 Subtle Listening workshop.

My own relationship with music, composition and sound design is extremely sympathetic to this approach: my work often starts from a deep, imaginative exploration of a field recording, or from images or visions arising during the process of improvisation and acoustic exploration of place. My ‘litmus test’ for a successful piece of music or album is still whether it provokes powerful unconscious imagery or a change in consciousness when listened to attentively. I was, however, more than a little anxious about how my students would respond to such an inward-looking (or inward-hearing) approach to sound. Happily, in the atmosphere created by Kim they were able to unselfconsciously engage in the exercises that the workshop involved. What follows are some personal reflections on the two days; I’ve written more generally about the workshop here, on my institution’s blog.

Integral to the workshop were exercises involving both meditation and ‘sound-shapes’. The exercise that introduced the group to the sound-shape concept involved drawing glyphs in response to a series of words: to try and express them not as semantic or symbolic markers, but rather as synaesthetic graphic designs that embodied the sound as a whole. The difficult of this exercise was – for me – to break away from a conception of a sound as something linear and unfolding in time, but to step back and realise the ‘sound in itself’. Having spent the last few months working closely with spectrograms it was difficult at first to move out of the time-against-frequency paradigm.

This difficulty seems to relate to the way that technology has changed our relation to sound, particularly the production of knowledge from acoustic artefacts (related to the emergent field of acoustemology). Even when working with sound at a relatively advanced level, we often prefer to rely on technology (meters, spectrographs) for our acoustic interpretation, rather than our ears and imagination. As a result we become stuck in certain modes of representation that are no doubt incredibly useful, but become difficult to disentangle both ourselves  and our relation to sound from.

Although Kim was keen to stress that there was no ‘right’ or ‘wrong’ interpretation of the sound-shapes, I was personally keen to break away from the time-against-frequency paradigm, and the allied spectromorphological approach that I had been exploring during the winter. I wanted to use this workshop to move toward an awareness of sounds as a whole: of sounds as atemporal, ‘everything at once’, rather than the spectromophological functions of onset, continuance and termination. I have long been fascinated with the ‘God’s eye view’ in medieval (and some later) art, in which events in time are shown at once, and buildings are depicted in manners impossible in linear perspective.

A ‘temporal perspective’ scene in an early 16th century engraving by Giovanni Battista Palumba. The hunter Acteon is shown in the foreground undergoing metamorphosis having discovered Diana and her nymphs bathing. The background shows Acteon hunting with his hounds, prior to the event in the foreground, as well his ultimate fate of being torn apart by his hounds after being transformed into a deer.

My initial attempts in the workshop met with varying degrees of success. However, the second day culminated in a sound-design project that gave me the time to formulate a strategy for comprehending sound-shapes as holistic, rather than temporally linear onset-continuance-termination functions.

The project was based on a group meditation in which participants were led to an interior place and asked to analyse the soundscapes and sound-shapes that they discovered in that environment. Initially it felt difficult to do this without falling back on my old modes of representation. This led me to approach the exploration of the acoustic environment conjured by the meditation through a three-stage process of abstraction.

My first stage was a fairly free, linear graphical score in which literal, symbolic and semantic representations of the sound and environment, concerned solely with transcribing my initial textual description of the meditation into the visual domain. 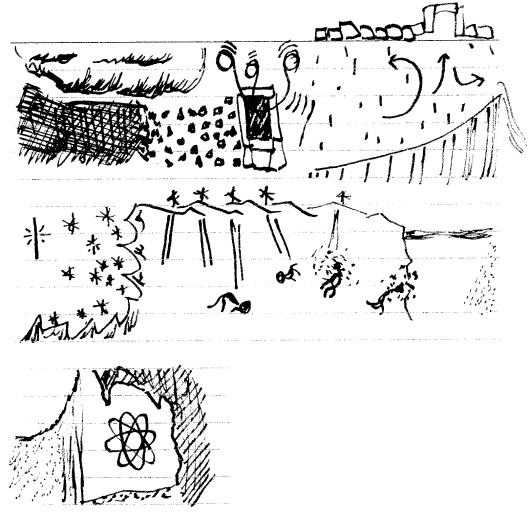 The second stage allowed me to focus more closely on the individual soundshapes in each scene. Although still keeping to a linear (and often pitch-relational) plan, the opportunity was taken to consider each sound and abstract them further into their own shapes, as far divorced from symbol and semantics as viable.

The final form involved taking the resultant sound-shapes and combining them into composite, atemporal emblems each one encompassing a scene from my meditation.

Of course, the question arises: why do this if you already know what you ‘heard’? I personally found the three stages of abstraction valuable in that in itself it helped me focus more clearly on the ‘imaginal acoustics’ of the scenes, to ‘hear’ them in forensic detail by refining them in my imagination before I even contemplated sitting in front of a DAW and attempting to realise them. This also presents a way of working that is precisely the opposite of my usual methodology, which begins with concrete sound – field recordings, improvisations. I then make some attempt to find what I’ve called – borrowing from Kathleen Raine – ‘the bright sound behind the sound’ – a process of working from the material toward the psychological. The approach yielded by the Subtle Listening project was the opposite: beginning on the inside and then developing an expression of interior experience into sound. This is integrally an imaginal approach – to quote John Hutchinson: “According to some Sufi thought, the ‘other’ [imaginal] world already exists in this one – our task is to externalise it, to allow it to unfold.”

5 thoughts on “Imaginal Acoustics: On Subtle Listening, Sound-Shapes and Time”